Then contact me to see how I can help you. Need a few more characters, or a few less speaking roles? Not a problem, as all my scripts can be downsized or upsized according to a school's needs.  I'm here to help you get what you need.
Do you have an idea, but don't know how to put it together? I'm only an email or phone call away, and I can help you to turn your ideas into a reality.

I've been involved in theatre most of my life. My years onstage and directing, along with being a drama teacher, have given me the skills required to create a successful script.  School productions give those 'drama queens' such an amazing opportunity to 'strut their stuff' on stage. They also come up with surprises, as that shy child suddenly discovers they do have confidence when surrounded by others. The benefits and rewards are endless for our kids.

'FIASCO IN THE FOREST' is a fun 'Whodunnit' murder mystery, with a touch of panto to get the audience involved as they try to solve the crime.
Speaking roles from a few lines, to being in every scene, caters for all your students. Opportunities for class items.
Email me at rainbowpoetry@gmail.com for a script to peruse.
Approximately a 60 min show. 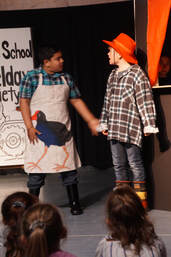 'CINDERFELLER HITS FIELD DAYS' has the audience chuckling from start to finish. With a demanding stepmother, a stepsister, two ugly stepbrothers, all with 'big' attitude, poor Cinderfeller has his work cut out for him trying to get to the Field Days. He dreams about tractors, but will his dream come true, or is the poor Fairy Godmother struggling with her powers?  Add a family of rascally rats, a pie seller who has his eye on the tasty pukekos, a royal family and townsfolk and there's something for everyone.
There is a longer version (approx 60 mins) or shorter version for smaller schools.
Email me at rainbowpoetry@gmail.com for a script to peruse.
​
* Cinderfeller  meets with the 'Pie Seller.' 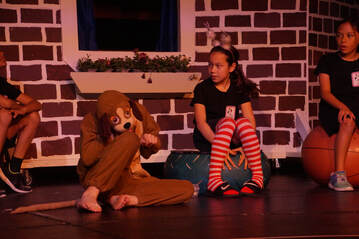 'EVERY DOG HAS HIS DAY'
Poor Max the dog loves visiting school. But when an unpleasant family turn up to enrol their children, there's a problem, and Max is banned from school. The children decide to take a stand to get  Max back, but will they be successful? Throw in a quirky Fairy Godmother, a kind policeman, his incompetent junior, an understanding principal and you have set the scene for  a great story. Add in class songs/dances.

​Email me at rainbowpoetry@gmail.com for a script to peruse.
Approx 60 minute show. 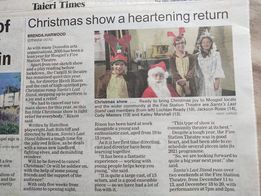 'SANTA'S LAST STAND'  When poor old Santa has had enough of lazy elves, spells going wrong, and a demanding evil landlord. Santa decides to go on strike, then things go from bad to worse when he goes missing, and a surprising hero helps to track him down. With a pantomime element, audience interaction is guaranteed.
Ideal for theatre companies looking for a Christmas themed production.  Approximately 75 min show.
Email me at rainbowpoetry@gmail.com
'THE MYSTERY OF THE TOMO'  a new script for 2021. Available for perusal now.

Elly and her friends find themselves in the middle of a real life drama when the ’Protector of
the tomo,’ turns up in what seems like a dream. The evil HAMBO has cast a spell over the
entire underground system. No one is happy anymore. Will the children be able to help find
the six clues needed to solve the mystery? What strange creatures will they meet in their
travels? Most importantly, will their quest be successful?

An approximately 60 minute production suitable for the whole school as there are song/dance suggestions for class items to be added.

BREAK'A'LEG  An exciting new script with a difference.
Winnie’s mother and father Joey and Ima Wannabee run the Break’A’Leg’ Academy for performing arts. Tonight is the night all their students look forward to their annual awards, the BAFTAS (Break’a’leg Academy For Talented Amazing Superstars.) Their students are excited to hear who’s been nominated and of course who hasn’t, and all the issues that revolve around winning, losing, forgiving and learning valuable life lessons. The underlying one being that we can all shine in our own way. Featuring an original song written by talented 13 yr old Bella. Music and lyrics will be provided.
This script is one with a difference as it can have a digital element to it. Each ‘movie nomination’ clip, can either be acted live or pre-recorded and shown as a film clip projected onto a screen on the stage.

Approximately 45 to 60 minute production suitable for small or larger schools, as there are options for you to choose which scenes you perform.

SANTA GETS AN E-SLEIGH
Santa’s trying to keep up with the times, and when his old sleigh fails it’s WOF, Algernon suggests that he replace it with an e-sleigh. The reindeer are getting older and are no longer up to pulling a sleigh around the world. Rudolph is the only one able to go with Santa on the new sleigh, but unfortunately, they run out of power over New Zealand. They manage to land close to a park in a small rural town in New Zealand on Christmas morning, and come across some disappointed children who set about helping them get on their way again.
As some parts can easily be doubled up, this doesn't require a large cast, so could suit smaller theatre companies or schools.

​Approximately a 60 minute show with suggestions for songs dance items.